8 Innovative Uses of Bike Lanes from Around the World

While many cities are working to decrease carbon emissions around the world, some are taking it a step further by going out of their way to make their cities safer for bike enthusiasts with innovative uses for bike lanes. Not only is it helping to reduce carbon emissions, but it’s helping people to get more exercise. (Sidenote: The writer started riding a road bike this year, and has lost almost 20 lbs).

The following list showcases bike lanes from around the world, from the simple to the creative. Dubbed as one of the best bicycle cities in the world, Copenhagen uses differently colored bike lanes to ensure better visibility to vehicles. The city’s goal is that by 2015, 50 percent of commuting will be done by bike, thus lowering annual CO2 emission by 80,000 tons, Image source Bike lanes in Portland are painted green especially in intersections where there is conflict between turning motorists and cyclists who are going straight. The green shaded lane serves as a warning to cars and helps prevent one of the most common ways cyclists get hit by cars., via bikeportland Just like ski lifts carry skiers, bicycle lifts in Trondheim, Norway are designed for easy uphill travel. Bike lifts have become one of the popular tourist attractions in Trondheim. See it in action here.via neofob

San Francisco has put up protected bike lanes that physically separate motorists from cyclists. The separator is made up of 3-foot-tall posts and are designed to flip back up if a driver rolls over them. via 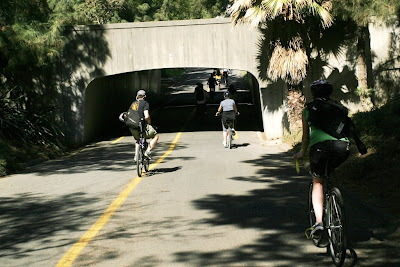 Being the first city in the U.S. to create on-street bike lanes, it is no surprise to see many bike paths in and around Davis, CA. The city has the highest per capita bicycle use in the U.S.via BikeCommuteTips One of the only three cities in the U.S. achieving platinum-level for bicycle friendly cities according to the League of American Bicyclists, the other two cities were also mentioned in the list (Portland, OR and Davis, CA). What makes this bike lane unique is that attractive landscape design was used to separate the lane from the main road.via beyonddc Bike lanes in Munich are so unique that they are not installed on the street but on the side walk itself. It’s a much safer way to ride bikes, where there’s also a mark intended for pedestrians.via craige

Make Your Own Bike Lane with LightLane

This one is a little different from the others on the list. A clever innovation from LightLane, this gadget aims to give motorists a clear view of your path even when bike lanes are not available. Though not yet out in the market, the LightLane is an outstanding concept for cyclists’ safety and shines a lighted bike line behind the rider. Image source