I made my third quick trip of the month to a REV3 event, this time to Sarasota, Florida for the final installment in the 2013 REV3 Triathlon Series. This was a big race with a large prize purse and double points on the line to decide the final standings in the REV3 Pro Series. It drew a strong field with an interesting mixture of athletes which made for an unpredictable and exciting day. Added to that were the unusually high winds from Hurricane Sandy’s steady march northeast, presenting a good challenge on what might otherwise have been a more mundane course. In fact, the winds were so bad that riptide warnings were issued and the Coast Guard informed REV3 that they absolutely could not stage a swim. It’s a good thing the staff are so nimble on their toes and readily adapt to the challenges that are thrown their way. The solution was to cancel the swim for everyone and do a run/bike/run for the pros and a time-trial started bike/run for the age groupers. This was the third race I’ve done within the past 12 months that was altered due to weather-related issues so I wasn’t really fazed and simply reorganized my Pearl Izumi running shoes and my Fezzari T5 triathlon bike to fit what the day called for.

It was really fun starting off with a quick little run first—with the exception of short-course ITU racing you don’t often find yourself in that large of a pack on the run in a triathlon. It felt like a real horse-race! I think the purpose of doing a 1.5 mile run first for the pros was to attempt to break up the field somewhat but most of the ladies ended up coming into T1 together anyway. It was a bit frantic with everyone trying to kick off their shoes and grab their bikes at the same time, not to mention that it was a really narrow space to begin with, but I had a good spot and was able to get through without any issues. 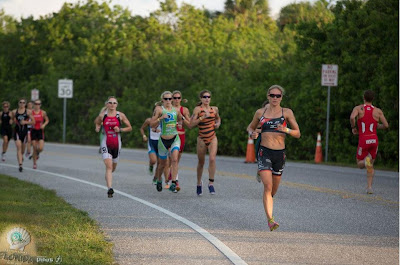 My strategy on the bike was to ride conservatively for the first half and let the tailwind do a lot of the work for me before pushing the pace and trying to make a move once we made the turn into the wind. Alicia Kaye and Becky Lavelle took it out REALLY hard and established a gap right away, but I hung back in a group that included Nicole Kelleher and Lauren Goss. I felt that I could afford to let Alicia go because she was not competing for the overall series, and while Becky was in the running for the series it was a tighter battle points-wise going into the race between Nicole, Lauren, and myself so I wanted to mark them for a while instead of risking a major blow-up by pushing too hard too early. This plan unfolded exactly the way I envisioned and I was able to bridge up to the leaders while building a gap on Nicole and Lauren in the second half of the ride. There was a short out-and-back section with about 10 miles to go where you could get a good look at everyone—and I liked what I saw! Rolling into T2 in 2nd place just steps behind Becky, I knew I was positioned about as perfectly as I could hope for going into the half-marathon. 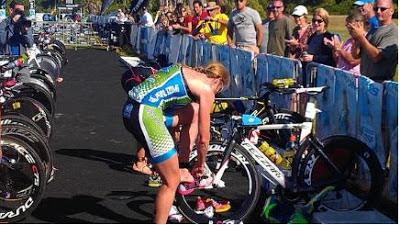 I made quick work of T2 and actually got out onto the run course in first place. My lead was short-lived, however, as Becky came storming by within the first half-mile. I didn’t panic because I had done the math and knew that I still had some wiggle room in the overall series in relation to Becky. I’ve been guilty of taking the run out too fast on more than one occasion this season and my plan was to start off more conservatively and then build the pace. However, when I tried to tighten the screws down a bit there was nothing there. My legs felt really heavy, I could tell my form was not pretty and no matter how I tried I could not seem to get my feet to turn over any faster. Nicole passed me somewhere late in the first lap, then I began a steady slide backwards through the field. The second lap of the run was something of a death march and I’m pretty sure that Mile 9 was the longest mile of my life. By the time I crossed the finish line I had slipped to 8th place, which was exactly where I did NOT want to be: in a position that did absolutely nothing to improve my overall series score and would in fact drop me down to 5th place in the final series standings. 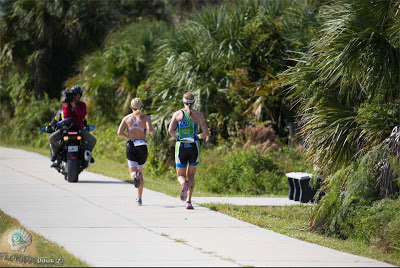 Who looks better in this picture? Photo by Eric Wynn.
To say I am bummed is a major understatement. I was in a perfect position going into the run and I let it slip away from me. I’m not really sure what the root of the implosion was—nutrition, hydration, over-exertion on the bike, or if it was simply all in my head. Whatever the case, it provides me with some good food for thought in the off-season and a project to work on so that I will come back stronger next year. I can’t really dwell on it now though because I’ve got an Ironman coming up in less than three weeks and a reunion with my fan club in Arizona to look forward to! 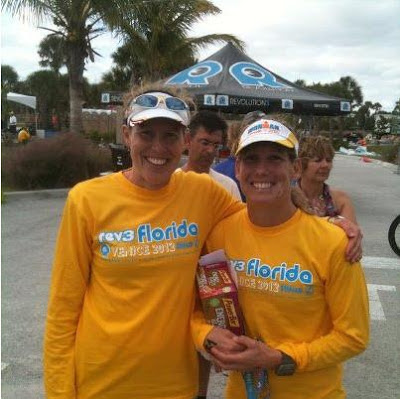 I’d like to express my gratitude to the following for their support over the weekend: to Ray & Lynn for theirincredible hospitality; to Brittany for the good company and introducing me to Ray & Lynn in the first place; to Chris Jarc for the much-need post-race piggyback ride; to Charlie, Eric, Sean, Stu, Ashley, Alex…oh gosh, there are too many to name! To the entire REV3 staff for being the most wonderful, friendly, fun, supportive, and professional event staff around; to the media crew for the great work (can’t wait to see the TV coverage!); to the city of Venice Beach for the venue and to all the volunteers who donated their time to make this event a success; and of course to my sponsors who help make it possible for me to get to the starting line in the first place (REV3, Recovery Pump, Powerbar, Pearl Izumi, Rudy Project, Blueseventy, Fezzari, Maxxis, and The Bike Shoppe).

Special congratulations to Brittany Banker for capping off a stellar season and celebrating 8 years of kicking cancer in the butt, to Trish Rydson on her age group win (great to see you Trish & Matt!), to Becky Lavelle & Jesse Thomas on their impressive victories, to Nicole Kelleher and Richie Cunningham for their spectacular seasons and the well-deserved series titles, and to my teammate Jessica Meyers for a great performance and clawing her way up to third place on the day. One day I will be tough as nails like that! 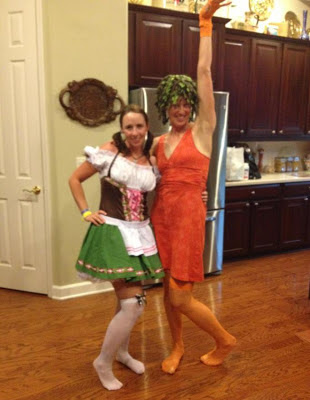 Any excuse to play dress-up! Any guesses as to what I am? Photo by Ray Pecharich.