The 2015 Fezzari Foré CR5 road bike was recently put through a long term review by Peloton Magazine.  The Foré CR5, part of the Fezzari Foré Collection, is the latest and greatest in road race and all-around road bike performance.  What did the riders and testers at Peloton Magazine think of Fezzari’s latest creation?  Scroll down to read the full text or grab the full digital issue at PelotonMagazine.com

More dollars equals fewer grams. Heading south of 15 pounds? Expect to spend a grand for every 100 grams you shave —ludicrous, unless you are a climber. Trying to go light on a budget has led people to do crazy things like take a drill bit to components or even—god forbid—buy consumer direct.

Fezzari Bicycles is a consumer-direct brand, meaning you buy from Fezzari, not a bike shop—and the markup that would be earned by a shop is passed on to you in savings. Interestingly, Fezzari has made a reputation with customer service. How can a direct company do that? It has a monster 23-point set-up that allows you to tweak every component and touch point, and you can swap parts adnauseam. Want pink bar tape and cables? Fezzari will do it. 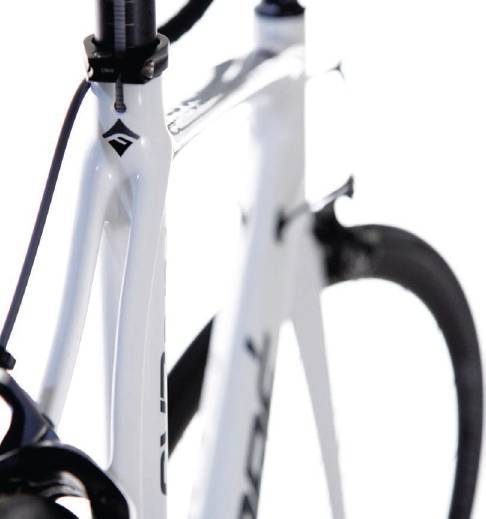 Fezzari’s latest bike is the 2015 Foré CR5, the fourth iteration of the Foré, the brand’s all-around road race machine. Fezzari wanted this bike to produce a big leap in Foré performance and for the first time the bike is in the fight with the big boys on the scale. At less than 900 grams for size 53cm, only the super bikes such as Emonda, Addict, R5 and EVO are significantly lighter.

Manufacturing techniques newly available to Fezzari helped make this possible, and Fezzari actually could have gone lighter. Instead, the manufacturer chose to add a few grams and use them strategically. The bike’s center of power has been significantly stiffened, while ensuring it wouldn’t beat you up by allowing deflection in the seat cluster, something that requires heavier, lower-modulus carbon. It’s a thoughtful and mature way to go about bike design that results in relatively slender tube shapes up top, with large diameters through the bottom of the frame.

Of course, going light requires more than a light frame and here again Fezzari has put a lot of thought into the Foré CR5. Rather than load it up with cheap parts and slap a Fezzari logo on them, Fezzari spec’d the bike like it was destined for the WorldTour. The group is full Dura-Ace 9000, including chain and cassette, and the cranks spin on a Praxis bottom bracket. FSA K-Force carbon handles the bars and seat post, while the stem is the only component wearing a Fezzari badge, an 88-gram alloy featherweight.

As with any bike, all the hard work can be undone by poor wheels. This happens time and time again with brand after brand. Fezzari avoided this by reaching out to a neighbor, Utah’s Reynolds. The Foré CR5 comes stock with the new Assault SLG, one of the fastest sets of all-around carbon clinchers available—stiff, lively, with beautiful handling. Assault SLGs cost $1,850 and are standard on the Foré CR5, and the 205-gram Schwalbe One tires ensure not an ounce of their performance is lost. The entire thing, sub-900-gram frame, Dura-Ace group and Reynolds wheels sells for $5,200. That’s Ultegra with alloy clincher territory for most brands. It’s just over 15 pounds on the scale in a size 58cm. Swap to Reynolds’ 1,365-gram Attacks and it is UCI illegal; plus, you actually save money. Insane.

We’ve come to expect a few things with bikes that share the Foré CR5’s slender lines and tube-to-tube construction. They are very comfortable with a lively feel that unfortunately do not translate well to big power or full-throttle cornering. The Foré CR5 defied these expectations. It has a smooth ride for long miles as well as a responsive, almost percussive feel at the bottom bracket when riding out of the saddle; but it more than holds its own during big sprints or testing the limits of traction down a technical descent. The grams sacrificed in the name of power transfer and handling have been well spent. 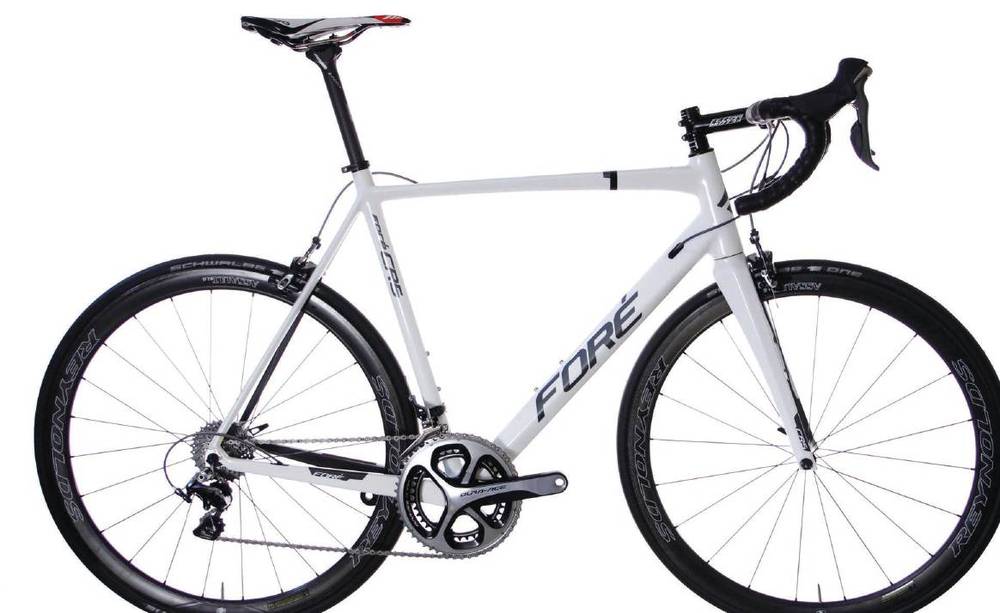 It particularly shines while descending. Set your line into a corner, load the inside bar to help the front tire bite, and the Foré CR5 traces a true line, handling the load at the head tube with ease, to let you rocket from the exit under full gas. During big power loads, sprinting or attacking over a roller, the bottom half of the bike is rock solid, snapping back and monolithically. Big riders will feel some flex at the bars, but unless you’re Marcel Kittel it won’t hold you back.

The work up top done by the seat cluster and slender 27.2 FSA post pay off with a buttery ride. It’s no magic carpet, but then a rider on a 15-pound race bike needs some feedback—you just don’t need your fillings rattled out. Fezzari got the ride quality spot on, threading a tight needle that will appeal to a fit fondo rider and pure racer alike.

The Foré CR5 rider prizes ride quality over all else. He or she wants light and stiff, but not at the expense of feel at the saddle, bars or contact patch. This rider is interested in saving some serious money, isn’t a label whore, and is willing to spend some of the savings on a six pack for the local bike shop owner on pulling in for a tune-up. p